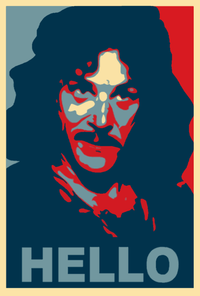 In The Princess Bride, the Spanish swashbuckler Inigo Montoya (played memorably by Mandy Patinkin), is the poster child for the seductive power of revenge. Montoya is a man whose entire adult life has been directed and shaped by his desire to avenge the death of his father. (The scene in which he ultimately fulfills this central goal of his life can be seen here in this YouTube clip. Only a few weeks ago did I realize that the other actor in this scene is the great Christopher Guest).

History provides us with other fascinating examples of the compelling power of the desire for revenge: Geronimo, the famous Apache warrior, describes his satisfaction after the slaughter of the Mexican forces that had massacred his mother, wife, and children only a year before: “Still covered in the blood of my enemies, still holding my conquering weapon, still hot with the joy of battle, victory, and vengeance, I was surrounded by the Apache braves and made war chief of all the Apaches. Then I gave orders for scalping the slain. I could not call back my loved ones, I could not bring back the dead Apaches, but I could rejoice in this revenge.[1] In Blood Revenge, the anthropologist Chris Boehm recounts how one of his informants described how a tribal Montenegrin typically feels after taking revenge against an enemy: “[H]e is happy; then it seems to him that he has been born again, and as a mother’s son he takes pride as though he had won a hundred duels.”[2]

Inigo Montoya, Geronimo, and tribal Montenegrins notwithstanding, the notion that revenge brings satisfaction does not sit easily with all psychologists. Kevin Carlsmith, Tim Wilson, and Dan Gilbert published a paper in 2008, for instance, that seemed to suggest that people only believed that revenge would bring satisfaction.[3] The notion that revenge was satisfying was, the authors suspected, another example of affective forecasting (an idea that I generally like, by the way): people only think that revenge is satisfying. They found that people did indeed expect to feel better after seeking revenge, but when given an actual opportunity to punish a bad guy after mistreatment in the lab, Carlsmith and colleagues found that avengers actually felt less satisfied than did victims who stayed their hands.

The Carlsmith et al. finding—people only think revenge will make them feel better, when it in fact makes them feel worse—has become a kind of psychological truism about revenge. Just yesterday, for example, this bit of common knowledge got repeated in an otherwise excellent article on revenge that appeared in the New York Times. In the article, Kate Murphy writes, “But the thing is, when people take it upon themselves to exact revenge, not only does it fail to prevent future harm but it also ultimately doesn’t make the avenger feel any better. While they may experience an initial intoxicating rush, research indicates that upon reflection, people feel far less satisfied after they take revenge than they imagined.”

But Murphy’s claim ignores a lot of data that indicates otherwise.[4] A series of experiments from Mario Gollwitzer and his colleagues have shown that people are in fact capable of experiencing just as much satisfaction from revenge as they were hoping for, especially when they become aware that the transgressor has learned a lesson from the punishment and has decided to mend his or her ways as a result of it. What revenge wants, it appears, is not simply to lob a grenade over a wall at a bad guy, or to blow off a little steam. Instead, what revenge wants is a reformed scoundrel—an offender who both realizes that what he or she has done to a victim was morally wrong and who acknowledges his or her intent to avoid harming the avenger again in the future. When revenge accomplishes these goals, it seems, it really does satisfy. The bad guy has been deterred from repeating his or her harmful actions. The goal has been accomplished. The itch has been scratched.

Let me be clear: Revenge is bad. It’s bad for relationships (generally), it’s bad for business, it’s bad for societies, and it’s bad for world peace. It’s probably even bad for your health. I’ve never met anybody who wanted more revenge in the world (except, of course, they were the wronged party). But no one has ever gotten rid of any bad thing in the world by understanding it less clearly. Ugly or not, revenge that finds its target can be as exhilarating as winning the Super Bowl. Once we really understand that revenge wants deterrence, we’ll be in a better position to create institutions that can provide alternative means of scratching the itch.

Boehm, C. (1987). Blood revenge: The enactment and management of conflict in Montenegro and other tribal societies (2nd ed.). Philadelphia: University of Pennsylvania Press.

3 thoughts on “What Does Revenge Want?”